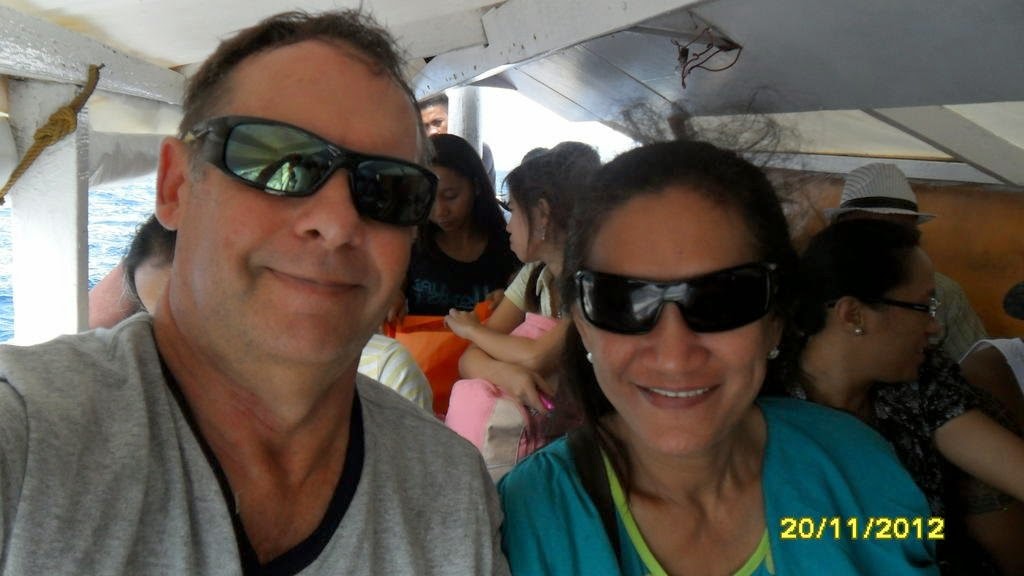 Island Passage.
I'm an Aussie and I was staying in Manila after meeting Jo for the first time and visiting Pagsanjan and doing the Pagsanjan Falls canoe trip and seeing a few other places. I had previously seen some photographs of part of an overgrown block of land, but had no idea of the surprise in store.

The next parts of thid Post will be continued on Tatay Ross's personal Isla Blog  at:
http://islaverde-tropical-friendly-resort.blogspot.com.au/

Where I write about my own thoughts of this beautiful place, and The Philippines and the people.

Today we have a special treat.  A Filipino Folklore tale in Tagalog that mentions Isla Verde.
I have not been able to find anyone to translate the story into English, but according to Google Translate, it is the tale of a naughty boy called ido, who is the son of a buffalo farmer.  Ido steals from an old hermit and plays with his radio controlled helicopter and prints from his computer.  Ok, that's what Google says.  Here's the story in its original language:

Reyboy's Easter visit with his colleagues - by Nanay Jo 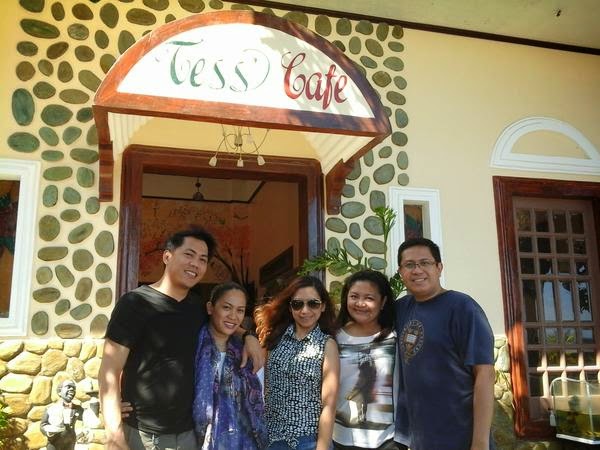 My cousin Reyboy and his office mates, Diana, Don and his girlfriend Joanna, and Reyboy's sister Ren came to our resort last Holy Thursday, April 2nd. They arrived after 8am, and I welcomed them with a good breakfast, as they were tired from the trip to Isla.  After their breakfast, they started to take pictures  of our resort. 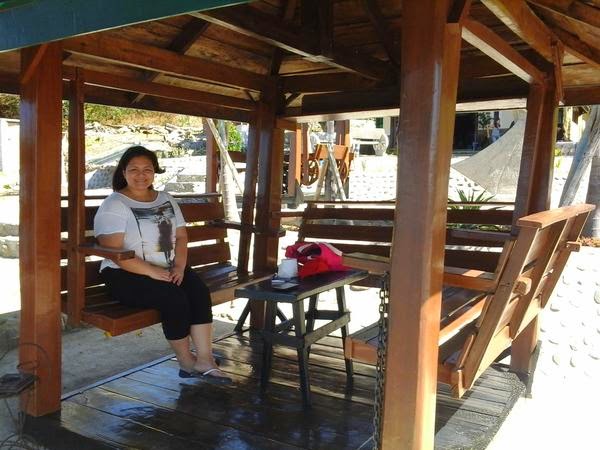 Ren's favorite  spot was  the swing near the sea wall.  She loved to stay there, watching the sea and taking pictures of the boats passing by as well as flocks of birds, flying near.  She liked taking a nap there and  enjoying the cool sea breeze, or just sipping a cup of coffee while looking at the sea.

After taking some photos, Don and Joanna decided to take a nap, and so did Diana.  Don stayed in the last kubo with Joana while Diana rested in the 3rd kubo.  Reyboy and I decided to take a  can of beer as he couldn't sleep yet.
While we were having a drink, I asked him if he would like to have videoke.  So we set up the videoke,  and we started to sing.  Shortly, Diana came to sing along with us. 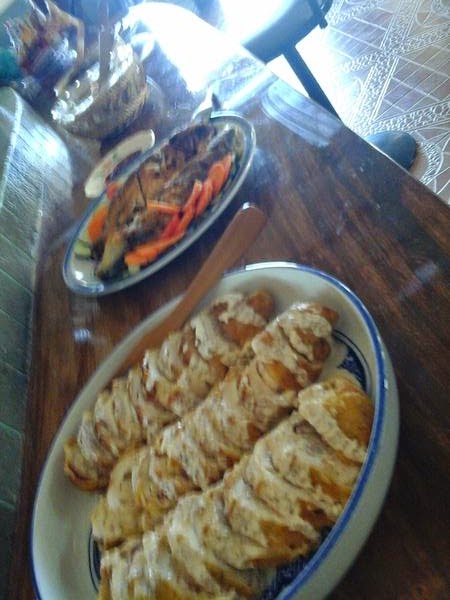 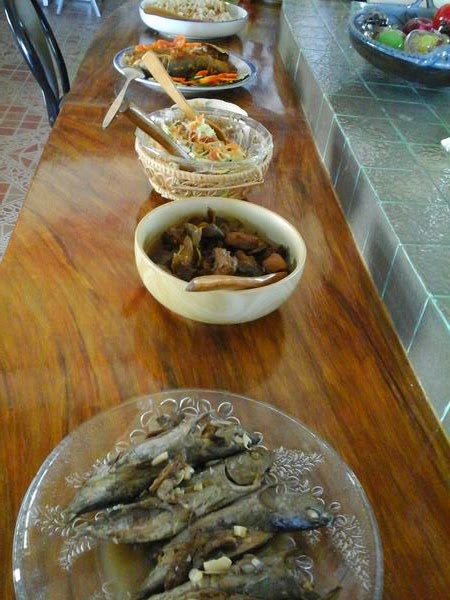 While they were singing I  started to prepare lunch for them.  I made some relyenong bangus (stuffed milkfish),  veggie salad, and sinaing na tulingan.  Tulingan, is the favorite dish served here in isla.  Everytime we have guests in our resort, I make sure it is one of the dishes served at our counter. Reyboy brought chicken cordon bleu and pork with liver adobo.  Their dessert was the singkamas with tasty homemade bagoong (shrimp paste).  When Don also got up, I started to serve lunch.  They said they loved and enjoyed our food. 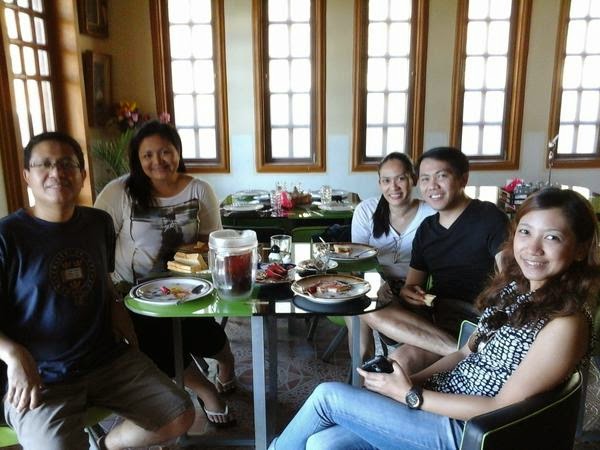 After they finished their lunch, they took a rest outside and chatted for a while then decided to take afternoon delight.  Since they were so tired they slept well, then later, woke up for dinner.  Then after dinner, we decided to drink some beer and the guys drank their  favorite brandy, Emperador.  As we were having a drink, we played cards, tongits and Pusoy.  We were all happy, teasing and laughing while playing.  And when midnight came we decided it was time to sleep as we were going to have a boat tour on the following day. 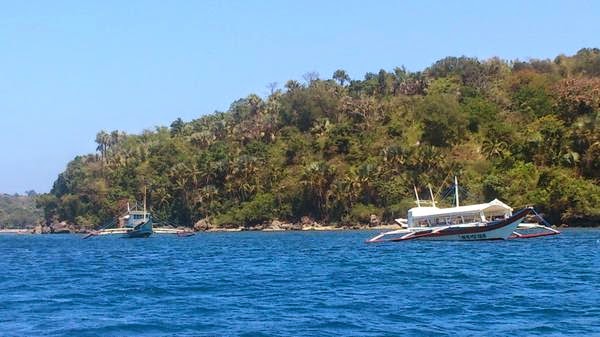 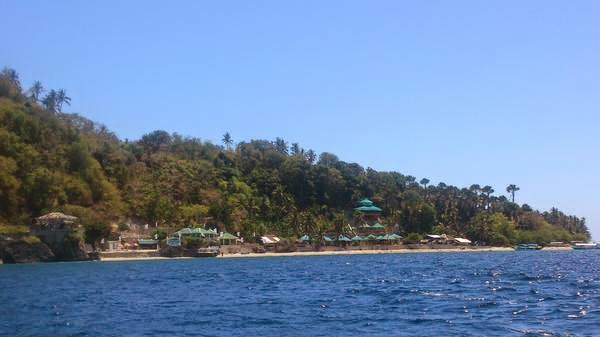 Daisy and I woke up at 4:30am, and we started to cook breakfasts for our guests and some extra food we going to take with us for our island tour.  I woke the guests at 7:30 for breakfast, and I started packing stuff that we had to take with us.  At 9am we left the resort, and started sailing around the island, and although the sea was quite bumpy, they enjoyed taking pictures of the island from the boat.  Our first stop was in San Antonio, near Sawang, the former Ozone Dive Camp.   Our visitors took pictures from the shore at Sawang, and swam at the white sand beach of San Antonio. 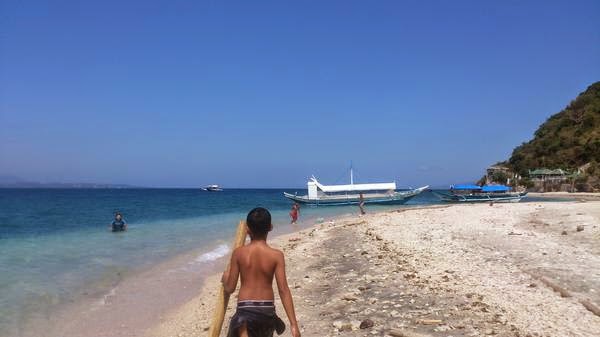 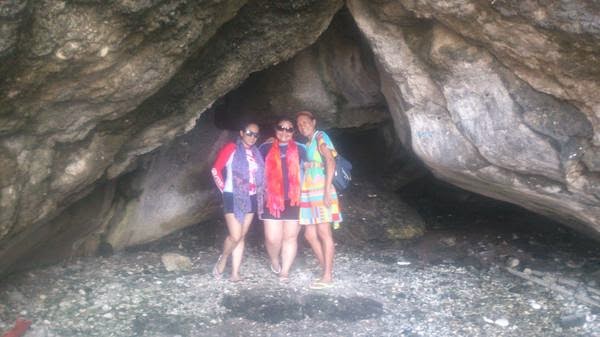 Because the water was cold, they did not stay long swimming.  Off the shore of San Antonio, we went to Mahabang Buhangin.  The beach here is a long ribbon of beautiful white sand and is one of the most beautiful spots on Isla Verde.  There we had our lunch and our boatman, Ric, who lives there gave us a table and chairs where we could place our food.  After lunch, Ren went swimming, and the rest had drinks and played poker.  Ric offered their kubo so we could play well at a table while Ren and Joanna took a nap. 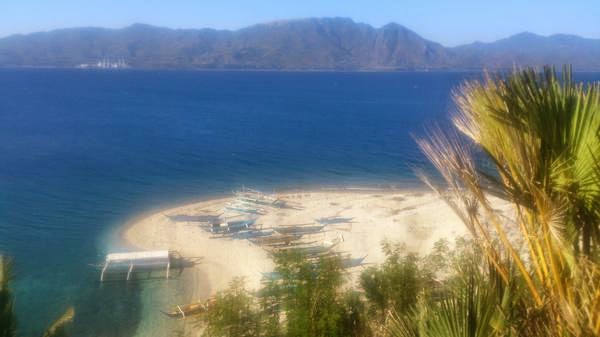 At 4pm, we left Mahabang Buhangin, and went to Cueva.  Everyone really enjoyed this place.  They went up to the lighthouse and enjoyed the view of isla. Ren and Joanna took a selfie on top of the lighthouse, while Don, took a lot of photos of the girls in the light house.  After few hours in Cueva, and by now tied from all the exercise and fresh air, we went back to the resort.

Once we were back we ate halo halo, to quench our thirst then after that snack, we enjoyed refreshing baths then  took a late rest before dinner. 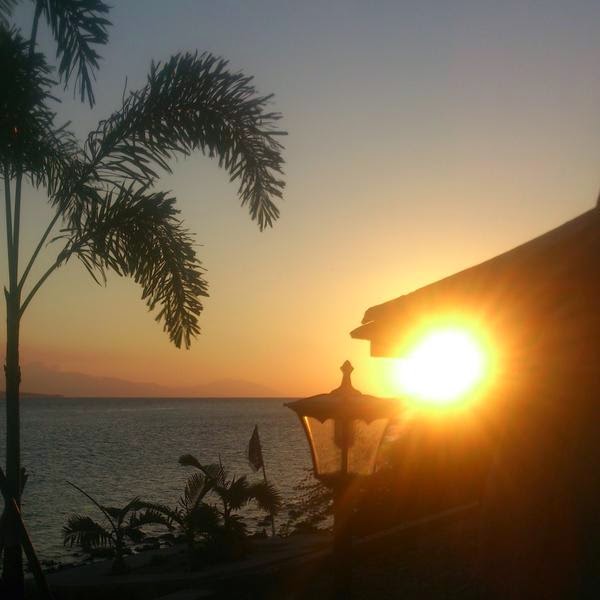 At 7:30 pm, dinner was served.   It was  their last night in Isla.  I went to bed early because I was not feeling  well, so I didn't join them for the last night.   But I fell asleep listening to the happy sounds of everyone drinking and talking with each other, and when I woke up in the middle of the night, they were saying good night to each other going to their own kubos to sleep. 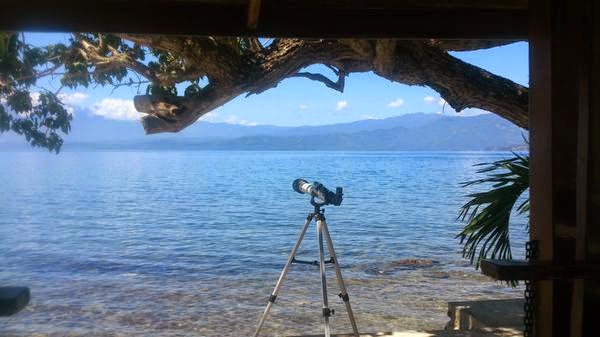 Don and Joanna enjoyed some star gazing at night thru our telescope.  On both nights that they stayed here, they passed some of the night watching the full moon, trying to find the flag that Armstrong placed on the moon through the telescope.  During the day time, they would use the telescope to look across the passage to Puerto Galera, which is only a few miles from us.  They both enjoyed biking together, roaming around the baranggay.  They even went snorkeling together, and as they enjoyed looking at the corals so much, they forgot that they had an underwater camera with them.  And so they forgot to take pictures.

Diana, who is the quiet type, enjoyed taking pictures around the island and posting them on her FaceBook page, teasing her friends and relatives.  She a good card player, and we all beat Don in tong its and pusoy. 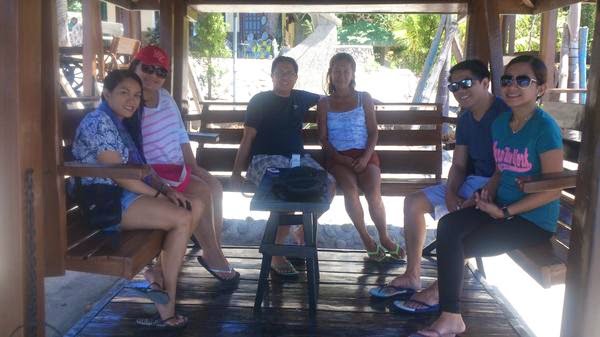 When I got up at 6:30am, I started to make breakfast.  I didnt bother to get them up early, as I knew they were enjoying  the coolness and peacefulness of morning at our resort.  Ren got up at 7:30am, asked for a cup of coffee and went for a last time to her favorite spot, the swing near the sea.  After an hour, the others got up and I served their breakfast.  After breakast, they took showers and packed up their things, prepared to return to work again with well relaxed bodies and minds.

At 10:30am, the boat arrived to pick them up and return them to Tabangao, for the return to Manila.  They left us with smiles on their faces, and promises of coming back again. 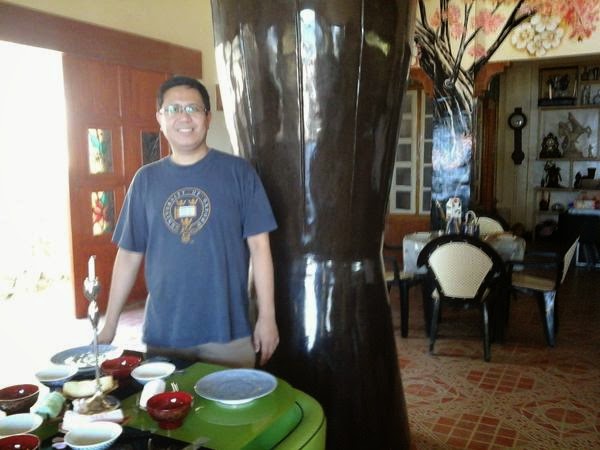